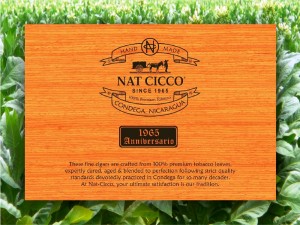 Zander-Greg, Inc., has announced the release of its new 100% long filler handmade premium cigar, the Aniversario 1965 Liga #4.Â  The name honors the birth date of the Nat Cicco cigar, and will be followed by another blend, the HHB, in the near future.

In 1965, the Nat Cicco line of cigars appeared.Â  Carrying the â€œRejectsâ€ name, it was theÂ  original cigar to create the image of bargain-priced, hand-rolled medium-filler cigars on the â€˜factory rejectsâ€™ theme.Â  It was produced by National Cigar Company, hence the â€œNat Ciccoâ€ acronym.Â  It became popular, commanding a major part of the value-priced cigar category until 2002, when distribution problems stifled it.Â  In 2007, however, seeing the value in budget-priced cigars, Pasadena, California, distributor Zander-Greg, Inc., acquired distribution rights, and has once again brought the brand to national prominence, aided by a cadre of former, loyal Nat Cicco retailers.Â  Subsequently, Zander-Greg introduced other Nat Cicco products, including the Cuban Legends, a mixed-filler, handmade cigar.

Aniversario 1965 is available in Robusto, Toro and Churchill shapes, and has Nicaragua-grown Habano-seedÂ  filler, binder and wrapper, all aged for a refined, harmonious blending of its select tobaccos.Â  This full-bodied cigar, has an abundant amount of complex and well-balancedÂ  flavors, with a pronounced nuttinessÂ  to satisfy the palates of cigar connoisseurs.Â  The tobaccos retain their vintage character, thanks to leaf processing that complements their quality.

Aniversario 1965Â  includes a pigtail cap at the head, and a foot that is enclosed by the wrapper leaf.Â  The finished cigars are semi-box-pressed and nude, and presented in attractive 20-count cedar boxes.Â  Manufacturerâ€™s suggested retail pricing runs in the $8.00 range, and the cigars will be available at tobacco retailers in late August.