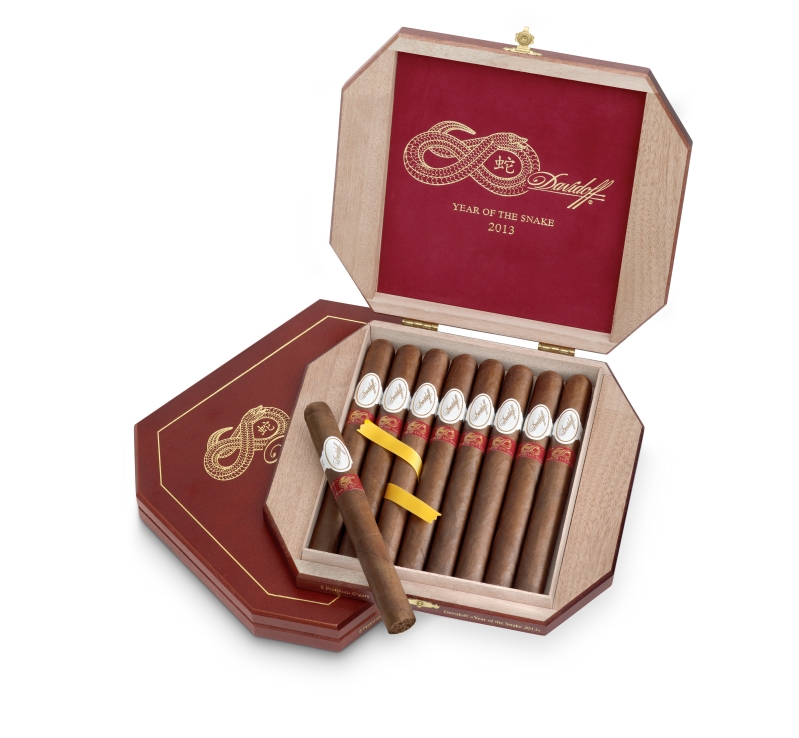 2013 is represented in the Chinese calendar by the sign of the snake. To mark the occasion,Davidoff has created the new “Year of the Snake” edition of cigars with three fine limited edition accessories.

Basel, November 2012. At the start of the Chinese Year of the Snake (February 10, 2013), Davidoff is launching the new 2013 “Year of the Snake” Edition cigars with exclusive limited-edition accessories. In the Chinese calendar, the sixth of the twelve Chinese signs of the zodiac is characterized as wise and graceful. The Snake is the quintessential symbol for intelligence and profundity. Particularly delicate and fine when depicted in a figure of eight, it has become one of the most popular decorations in all of Asia, not only for its unique symmetry but also because it carries the promise of infinity, material prosperity and luck. It is said that Snake-people like to possess the finer things in life.

Premium cigar brand Davidoff is also synonymous with luxury and the total “crop to shop” concept. “Year of the Snake” is, therefore, not only the unusual name given to the new limited edition, but also the connection of quintessential wisdom and stylish quality
awareness with Davidoff.

Integrating these characteristics into an aroma represents a challenge for the Davidoff Master Blender: namely, to combine particularly old tobaccos to successfully create three layers of flavor – from floral nuances reminiscent of honey, to caramel, and finally to peppery notes of wood or nut, whilst also providing a captivating quality…. highly aromatic, with light-medium strength and Cuban thickness, the cigar develops a charming creaminess due to the Ecuadorian binder. The impressive Churchill format makes for a long smoking experience punctuated with the delicacy and refinement of a cigar with charisma. The octagonal, red lacquered wooden box containing eight cigars will provide pleasure in the coming year.

The cultural background of this 2013 “Year of the Snake” Edition is every bit as fascinating as its aesthetic appearance: The “White Snake Story”, the Chinese love story still extremely popular today, can trace its origins back to a legend from the Ming dynasty (1368 AD) and, amongst other things, has inspired Davidoff’s new cigar — a cigar that preserves its cultural heritage whilst using passion and attention to detail to unlock the spirit of a dynamic, global environment. Those who fall in love with this cigar have no sense of superficiality. The fine, profound 2013 “Year of the Snake” Edition is for aficionados who smoke intelligently. The uniqueness of this luxurious edition with a double ring speaks for itself. It is limited to 4,500 pieces and is available at Appointed Merchants beginning in December 2012.