The CAO Nicaragua is a new blend brought to the IPCPR show in Las Vegas for 2018. A new addition to the “World” line of cigars they have produced in past years, which include America, Italy and Brazil amongst others. From the rich volcanic ash soils, the CAO Nicaragua uses filler leaves from three different regions in the country, Jalapa; Esteli and Condega. Bound and wrapped in leaves from the Jamastran Valley, just over the Nicaragua border in Honduras.

In all honesty I have not had much experience with CAO or their catalogue. The only other cigar I have smoked was actually the Amazon Basin styled cigar from this “World” line. My experience with the Amazon Basin left me with high expectations for this Nicaraguan blend. At first glance the Wrapper has a nice medium to dark brown appearance, which for no rhyme or reason had me craving baked gingerbread.  It has a faint but noticeable oily sheen which laminates the visibly present veiny structure. The band is constructed in traditional CAO fashion with its Big pointy “A” being the pronounced letter in the companies namesake. The color scheme displays a beautiful light blue color, accented in Gold bands, paying homage to the Nicaraguan flag. On the inside of the band there is a pleasant surprise, as printed in that same light blue color is a topographical map of the Country of Nicaragua. Aesthetically the CAO Nicaragua is very pleasing and passes the physical appearance test. 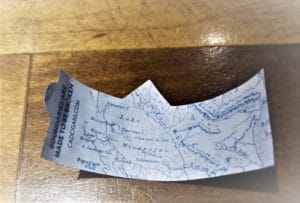 I elected to do my homework sitting on the patio of my favorite local watering hole the Little Elm Crafthouse, and paired the CAO Nicaragua with a Pecan Porter. I decided to go with a wedge “V” cut, as that has always been my choice of preference. On the cold draw I tasted earthy, barnyard like notes, along with strong hints of dried fruit. Upon lighting the same earthy tones played and the initial retro hale was slightly pepper laden but mild in taste and strength.

The First third of the CAO Nicaraguan gave me the aforementioned flavors of Earthy tones, however turning from Barnyard hay taste to more of a woody oak feel. The dried fruit has come and gone and is not very consistent. Slight hints of pepper make their presence from time to time but like the dried fruit, inconsistent. The strength and body of the first part of the CAO Nicaragua are mild to medium at best. I also couldn’t tell if it was the Pecan porter or the cigar but I kept getting notes of toasted nuttiness. Nothing extremely pronounced, I gave myself several pulls without having had a drink and kept tasting it so I assumed it was coming more from the cigar. As expected the burn was spot on, the slightly oiled wrapper helped give it a nice even and slow burn. The ash was thick and held on a good couple inches before falling on its own. 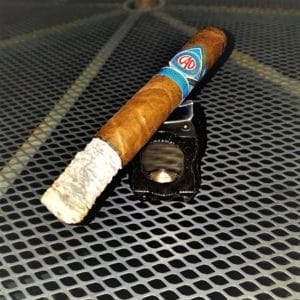 As I started into the middle of the cigar there’s not much complexity. Same notes continue to come through, Earthy, Nutty, slight pepper. The one thing I continuously waited for was thinking the pepper would start picking up in intensity, being the case with a lot of Nicaraguan filled cigars I have had before. That pleasant dried fruit tasted on the cold draw is even less present the further I have gone, as if I was playing a game of peek-a-boo at first, and now the other party is just not interested. Continuing on point is the burn and draw. Very little effort needed on the draw to get a good full mount of smoke and I havent had to perform any touch ups to the point.

The finnish finally opened up a little more giving off a slightly creamy espresso taste and feel. The pepper I have been waiting for ramps up slightly but not to the desired level still. Still in play is that woody, earthy, nuttiness. Strength picked up a bit towards the end putting it to a full medium body. I did start to notice more of a rich tobacco flavor as I smoked the last inch or two of the CAO Nicaragua. Although I wouldn’t necessarily say that ended up being a good thing. Still the best part of the finnish was the composure of the structure. Such a perfect burn and I only had to ash the cigar three times before getting down to the very end. Ash stayed long and thick through the entire process.

Ultimately this was not quite what I expected or anticipated. It did not hold up to the previously mentioned Amazon Basin, but was still not a bad smoke. The only true negative I found had nothing to do with smoking the cigar at all, but when I went back inside the bar to have a second beer, the first thing out of three different patrons mouths was how unpleasant the smell was. I hadn’t really paid much attention to it as I was smoking, but I could really start to smell it myself the longer I sat inside conversing between bar mates. I then remembered how much the end of the cigar had that rich tobacco flavor and I can only attribute that to the smell as well. It was not quite cigarette like but nonetheless very nicotine based aroma. All in all while the complexity of the CAO Nicaragua was not the greatest, the notes that did stand out stayed true throughout the whole cigar. I would still have this cigar again, at least once more to see if there is any difference from one to the next. Being such a new blend it may take some additional time to age before the true characteristics present themselves. The CAO Nicaragua is worthy of a purchase as the price point is extremely friendly, but I wouldn’t say at this point its worth more than a couple sticks.