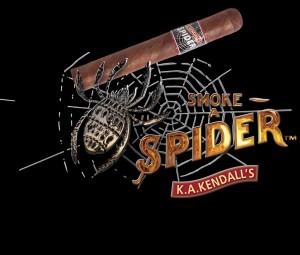 Kurt A. Kendall, founder of 7-20-4 Cigars, has added two regular-production additions to his portfolio of resurrected archaic brands. Both are hand-made, 100% tobacco boutique premium cigars, entirely separate from his existing 7-20-4 premium line.

Both are parejos only and share several characteristics … they are crafted at Tabacos de Oriente (Danli, Honduras), with five years of aging on their tobaccos, plus six months on the finished cigars. Neither contains ligero … relying instead on the other tobaccos in the blends to gain their flavor. Their triple-capped heads prevent unraveling, and they are entubado-bunched, which avoids uneven burn and tight draws.

“Hustler” has now entered full production, following its 2012 debut and an initial trial run to test customer acceptance. Kendall advises, “The dapper rogue on the original 1890’s box label and its two-tone ‘barber pole’ wrapper have proven strong enough incentives to draw smokers to try our Hustler boutique cigar. A stack of back-orders have convinced us to add them to our portfolio.”
Hustler is presented in a high-quality Spanish cedar box ($270 MSRP), with nine cigars in each of the three compartments: 5-1/2″ x 52, 6-1/2″ x 58 and 6″ x 54. A five-pack Hustler presentation is also offered in the company’s highly-acclaimed 4-1/4″ x 40 Dog Walker shape. The company describes this new Hustler Dog Walker as a “petite barber pole.” Kendall is also offering a Hustler ten-pack which retailers can use for single-stick sales or to replenish the boxes, which make handy displays. The dual wrapper combines a robust Brazilian Mata Fina with a moderating Ecuadorian-grown Connecticut Shade leaf. The Jamastran and Jalapa filler is held in a Costa Rican binder. Kendall says the smoke is, “Medium-bodied, with the spiral wrapper providing a visual emphasis to its swirl of complex flavors and aroma.”

“Spider,” Kendall’s latest cigar, originated in the 1930s in Somersworth, New Hampshire, his home state. To test market acceptance, it was first released to a limited number of New England smoke shops in 2-011. Back in the ‘30s, it retailed for just a (silver) dime. … the 6″ x 52 (only) shape now retails for $220 per 20-cigar humidor. The presentation is a strong selling point … a furniture-grade Spanish cedar humidor, it has a glass lid that is etched with the original Spider logo.

Spider’s Jalapa (Nicaragua) wrapper is dark, oily and lightly-toothed. It holds a Jamastran (Honduras), Jalapa and Colombian filler, in a Honduran binder. Kendall describes Spider as being “medium-to-full in body and refined, with richness and complexity from start to finish. The predominant note is cocoa, and the aroma is enticing. Spider satisfies veteran smokers, but also suits mild-cigar lovers’ palates, without overwhelming them. Echoing Sullivan’s original motto, Spider is blended for every palate.”
Smokers can experience both the Hustler and Spider offerings at tobacconists nationwide, beginning in August . Kendall also hints at an upcoming Spider Dog Walker.