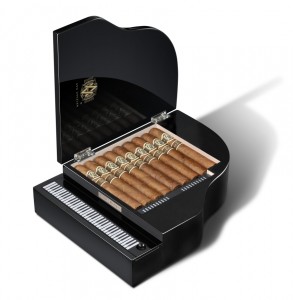 Tampa, FL – September 14, 2012 – This year marks the 25th Anniversary of the AVO cigar
brand created by cigar icon Avo Uvezian, who began composing cigars in 1987. To celebrate the 25 years of “CIGARS IN PERFECT HARMONY,” Avo Uvezian has decided to share with you his two greatest passions, the piano and the cigar. It is this passion for music and cigars that has presented Avo with such happiness throughout the last quarter century. Today, in celebration of 25 years, Avo presents his passions to you…

“The packaging for this marvelous occasion is a masterpiece of its kind. The “grand piano” box, crafted specifically for the 25th Anniversary of the AVO brand, is monumental and beyond comparison.” explains Scott Kolesaire, AVO Brand Manager. “The 25th Anniversary Edition cigar is a magnificent blend that perfectly captures the passion, quality and expertise that has gone into every AVO cigar over the past 25 years.”

The “AVO 25th Anniversary Edition” is produced in extremely limited quantities, only 2,000 individually numbered boxes containing 25 cigars each will be available in the United States.

The retail price will be $16.00 per cigar – $400.00 per box, taxes not included.
“AVO 25th Anniversary Edition” was unveiled at the IPCPR convention in Orlando, FL. and will begin shipping to Select Merchant locations this week.