From sowing the seed to the shelf, La Aurora has invested 12 years in the production of Hors dâ€™Age. All tobacco used in the creation of this cigar come from the 2006 harvest, and then are subjected to twice the usual aging time even given to La Auroraâ€™s premium lines. Then, even only 6,000 boxes are produced world-wide.

Wrappers and binders from Ecuador are used to produce Hors dâ€™Age, with the filler being comprised of Colombian, Dominican, and Nicaraguan tobaccos. 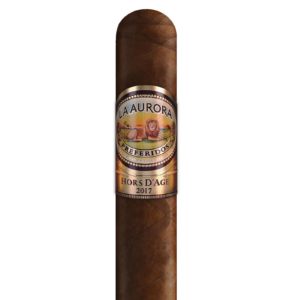 Hors dâ€™Age demonstrates perfect balance typical of extra-aged tobaccos, with notes of black pepper prevalent along with a multitude of complex, delicate flavors. Notes of wood, cinnamon, nuts and citrus blend with a finish of dark roast coffee with a creamy texture and long finish.
La Aurora Hors dâ€™Age is presented in 15-count boxes of 6×54 Toro.

To commemorate this launch, La Aurora has also produced an extremely limited amount of humidifiers with a humidification system called Cigar Spa. The lid has been made with Spanish olive root and cedar wood has been used for the interior trays. The metallic finishes are rose gold.