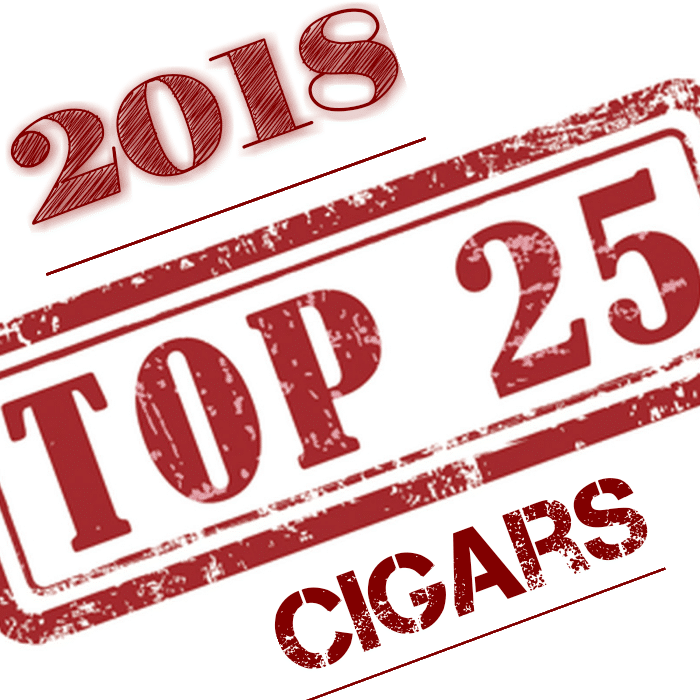 Well brothers and sisters of the leaf, it is time for our top 10 cigars from 2018! We appreciate you all checking out our site and hope you have enjoyed! Like our choices? Let us know! Think something shouldn’t be on here, we would love to hear what you would put up instead! So now onto the top 10!

So, this cigar may be one of the harder sticks to get as it is only solid in the best city in the world, Sin City, good olâ€™ Las Vegas! This cigar is a house blend and can be found at Casa Fuente in Caesars Palace. The Maduro packs so much flavor but not one bit of it is over powering. Leather, earthy, a slight sweetness, and a little hint of vanilla towards the end are just some of the flavors you will enjoy with this cigar. While you are there, donâ€™t forget to try their mojito! Coming from someone who was not a huge mojito fan, I can honestly say I just never had a mojito done right, like they do at Casa Fuente.

Being the newest release of the Patoro Line, the Platino exemplifies class and elegance. Aesthetically simple with the traditional single colored (Black) band exposing the Patoro â€œPâ€, and a Dominican Wrapper with the likeness of Gingerbread. The Patoro Platino features rich earthy tones with subtle hints of coffee and spice. While the presence of pepper isnâ€™t predominate on the palate, it reflects a peppery aroma that keeps you interested. The Patoro Platino is a full-bodied smoke, medium to full in strength and dominated by Dominican tobacco from Wrapper to Fillers. Available in three vitolaâ€™s: Robusto (4.92 x 50); Toro (5.91 x 50) and Perfecto (6.3 x 50) and a MSRP of $16-17.

(Extra: The ash on the Platino is a thing of beauty!)

Edgar Hoill is THE MAN with this version of the OSOK â€œOne Shot, One Killâ€ San Andres. Named after his unique photography style Edgar has created this blend with the famous Casa Turrent family with the sole intention of bringing Mexican tobacco to the mainstream. The fast-growing popularity of the Mexican San Andres wrapper is taken a step further with this blend as the entire cigar features purely Mexican San Andres tobacco, making this OSOK one of the only true Mexican Puroâ€™s on the market.  The OSOK San Andres features full bodied yet smooth notes of cocoa and leather, as well as a nuttiness that plays nicely. The draw is light and airy and very easy to smoke. Featured in one Vitola (5 Â¼ x 54) and retailing at an affordable $8.50 this is a cigar that you donâ€™t want to miss out on if you can get your hands on it.

La Gloria Cubana has always been a company that you can trust to bring you a solid product and normally will bring you notes from a true Cuban cigar. The Esteli was introduced at the 2018 IPCPR as a modern take on the classic La Gloria Cubana blend. This smoke is bold, beautiful, and tasty. With a Nicaraguan Jalapa wrapper and Hondorun filler, this stick just embodies the ideal smoking experience. As you puff away, you will get notes of spice, pepper, cedar, and light earthy notes. With three sizes to choose from and a VERY reasonable price ranging around the $6 to $7 range, we can promise you will be happy you picked this up at your local shop.

They say good things come to those who wait and that could not be more spot on when you talk about the FSG by Drew Estate. This cigar has been in the works since 2011! When you have great minds like Jeff Borysiewicz and the guys behind Drew Estate working together, you can expect things to be meticulous done to ensure all tâ€™s are crossed along with the dotted Iâ€™s. One of the best features on this cigar is the gorgeous Brazilian Meta Fina wrapper. It is stunning in color, feel, and of course, taste. From lighting up to the final draw, you will get sweet and savory notes that will make you feel like a million bucks after a nice T-bone dinner, with taters of course. You have four sizes to choose from and a single cigar will run you about $12 or more. Every penny of that will be considered well spent once you are done.

This was a cigar was a highlight at this yearâ€™s IPCPR. This is definitely one of the bolder cigars on this yearâ€™s list. Sometimes bolder cigars lack flavor but this is not the case with the Punch Diablo. The Diablo is crafted in Esteli at one of AJ Fernandezâ€™s facilities and features tobaccos from four different countries. Wrapped in a Ecuadoran Sumatra Oscuro wrapper, this cigar brings you a dark and bold flavor profile filled with notes of wood, earth, leather, and pepper. Also, this cigar normally runs around the $6.50 range so it is not only an amazing smoke, but an amazing price. There are three sizes to choose from including a Robusto (Diabolus), Toro (Scamp), and Gordo (Brute).

We could go on and on for days about United Cigars, from their product to the men behind it. Nelson Alfonso is a mastermind of Tobacco and a Branding genius! And as always, a big shout out is certainly deserved for Oliver Nivaud who reps United Cigars to the fullest and is one heck of a guy! (Thanks for the cigars my friend, Salud!) As for the Bandolero, if you have had the pleasure of enjoying them you probably know this is about as solid of a stick as they come. The interesting thing about the Bandolero and the other two main cigar lines from United (Atabey and Byron) is that majority of the tobaccos used are kept secret to the makers only. Although â€œcough coughâ€ I may have heard through a little birdie that some Peruvian could be a possibility. This medium body yet full-flavored cigar features a complex variety of notes from savory oak, spices such as cinnamon play throughout and we may have gotten a hint of citrus that likes to play a fun game of peek-a-boo here and there. The burn is just shy of perfect every single time and the draw is nice and open. This vitola, the Vanidosos is my favorite to date and retails right around $11, which is much more wallet friendly than the Atabeys or Byrons.

The Casa Turrent 1880 is another true testament to the greatness of Mexican tobacco that, in our opinion, goes relatively undervalued in todayâ€™s cigar market. Alejandro Turrent made it a point with this cigar to honor the heritage of the brand by the â€œ1880â€ namesake capturing the year that the Turrent family began in the growing business. With minimal veins and visibly pleasing toothy wrapper, this dark chocolate brown San Andres Wrapper passes the eye test. Not quite a Mexican puro, the 1880 features the aforementioned San Andres Mexican wrapper, bound in Mexican Criollo 98, and fillers of Mexican and Nicaraguan Criollo 98 leaves. The Casa Turrent 1880 smokes much milder than the look indicates, but very smooth and pleasant from cap to foot. With a full creamy and smooth mouthfeel, this cigar provides notes of chocolate and earthy tones, complimented with every so slight hint of pepper and a tang we always have a hard time putting a finger on completely. Offered in a single vitola a Toro (6.5 x 54) and retails about $16 per stick. Sold in boxes of 10 these are not particularly easy to find widespread, however more production is rumored to be on the horizon for the near future. This cigar has been by far one of our absolute favorites of this year and the Turrent family brings Mexican tobacco to the forefront better than anyone else the country has to offer.

So we know AJ Fernandez has burst into the cigar scene in the last couple of years and has been partnering with many amazing brands out there including Montecristo, Punch, Cigar Internationals Legends line, Romeo y Julieta and more but we did not see this partnership coming as H. Upmann has been such a staple of the cigar industry sticking very much to its roots. However, when they pulled the trigger to work with AJ, we knew we were in for a treat and this cigar is exactly that! This medium-full smoke features an Ecuadorian Sumatra wrapper around Criollo 91â€™ and Piloto Cubano fillers that help bring you flavors such as roasted nuts, spice, very light pepper, and cocoa. We here at InTheHumidor have smoked many of these cigars and not once have we had a poor roll or a bad burn. It just shows when you pair 2 powerhouses together, you are going to be blown away. This cigar will run you about $8 and is available in a Tobusto, Toro, and Churchill.

It is that time! Time to unveil our top smoke of 2018. Without wasting anymore time, coming in at #1 is another cigar debuted at this yearâ€™s IPCPR. It is the Cedrus by Southern Draw. Before we talk about the cigar, let us talk about the dynamic duo who run Southern Draw and that is Robert Holt and his lovely wife Sharon (commonly referred to as The Rose). When you start off in any industry, especially one such as the premium cigar industry, it is not easy to make a name for yourself and requires lots of work. Within a rather reasonably short time, Southern Draw has jumped from small boutique, to big boutique, to becoming a household name in the cigar world. That of course is partially because the cigars in their line are EXTREMELY tasty but also because these two work harder than nearly any person I have ever known. Traveling on the road nearly 300 days a year can only be done with the drive and passion these two have for the product they put out. With some of our favorites such as the Rose of Sharon and the Jacobs Ladder, we were VERY excited to try the Cedrus when we heard about it at the IPCPR. And let us say, it was beyond worth the wait. This cigar from start to finish burns amazingly with lovely, full clouds of smoke and it just puts you into a pure state of comfort. With notes including cedar (of course), pepper, spice, and even some creaminess throughout, it will just make you want to get up, grab your backpack and hike your butt back to the cigar shop to buy more of these beauties! If you have not tried a Southern Draw, please do yourself a favor and pick up one of these beauties and look out for Robert and Sharon. We can promise with the way they travel, you probably will see them at a shop near you!