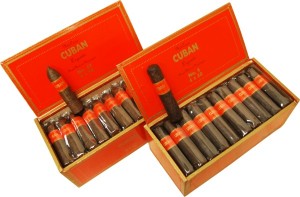 Cuban Legends are made in Nicaragua, with a Nicaraguan filler blend.  Presented 40 cigars to a box, their suggested retail pricing for the existing shapes ranges from $2.15 to $2.60 each.  Zander-Greg began shipping the #4 cigars at press time, at an MSRP of $2.15.

The Nat Cicco name first appeared in 1965, with the Churchill and Robusto Rejects value-priced medium-filler cigars.  They were the industry’s original cigars on the rejects or factory seconds theme, often copied by other cigar manufacturers.  Over the years, Nat Cicco Rejects, and now, Cuban Legends, have proven to be a lot of cigar for the money, as well as a smooth, refined smoke.